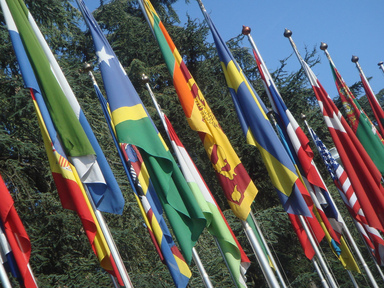 In the chapter on population, we discussed how and why population growth exploded in the 20th Century. Recall that as nations evolve from Stage 1 to Stage 2, death rates plummet, but birth rates maintain were maintained at their existing levels causing an explosion in population. Europe and America were the first nations to enter Stage 2, but today no nation is in Stage 1. Most nations are still in Stage 2 and the result of this is that the human population is now over 6.6 billion. Our numbers will peak to 9 billion by 2100.

The 20th Century was also the deadliest century, in terms of war, in human history.  This century experienced two world wars, multiple civil wars, genocides in Rwanda (Tutsis and moderate Hutus), Sudan, Yugoslavia, and the Holocaust that decimated the Jewish population in Europe during WWII. In addition to WWI and WWII, this century experienced the Korean War, Vietnam War, the Cold War, and the first Gulf War. Additionally, this century saw regional and civil conflicts such as those experienced in the Congo (6 million people died), as well as an upsurge in child soldiers and modern slavery. 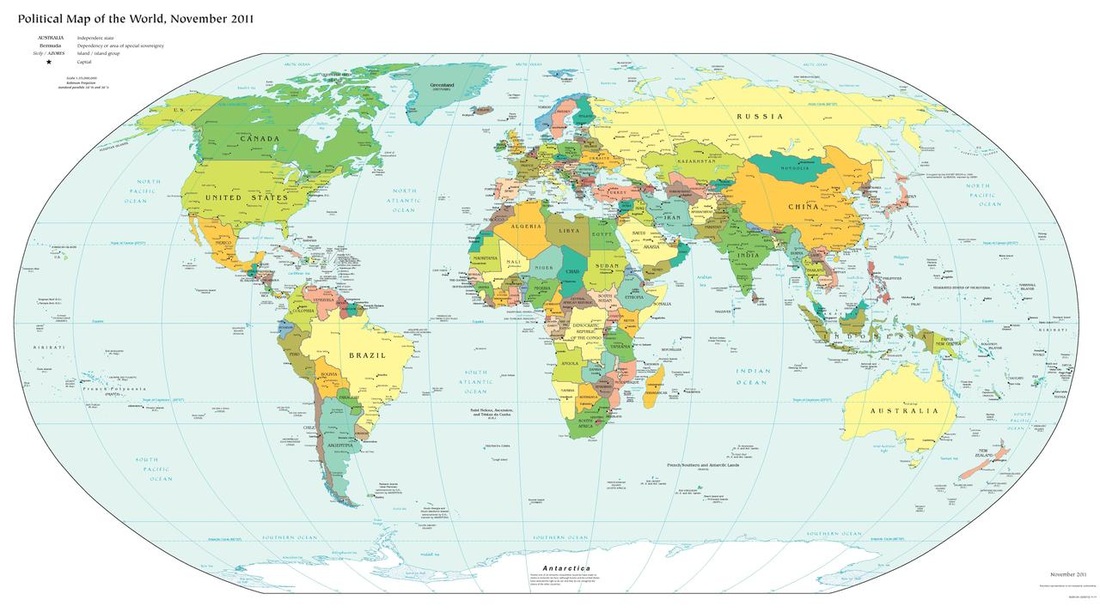 STATES
A state (also called a nation or country) is an area with defined boundaries organized into a political unit and ruled by an established government that has control over its internal and foreign affairs. When a state has total control over its internal and foreign affairs, it is called a sovereign state. A location claimed by a sovereign state is called a territory. Currently the world has 193 nations as of 2012; however, many of those nations dispute their borders.

The idea or concept of a state originated in the Fertile Crescent between the Persian Gulf and Mediterranean Sea. The first ancient states that formed during this time were called city-states. A city-state is a sovereign state that encompasses a town and the surrounding landscape. Often, city-states secured the town by surrounding it with walls and farmlands were located outside of the city walls. Later, empires formed when several city-states were militarily controlled by a single city-state. Empires were also formed

COLONIES
A colony is a territory that is controlled by a sovereign state. European powers focused on establishing settlements and political power and all around the world by imposing their military, economic, political, and cultural influence through colonialism. Europeans used colonialism to promote political control such as Christianity, extract natural resources, increase economic influence, and to expand political and military power. The European states first colonized the New World of the Americas, but later redirected their focus to Africa and Asia. This colonial expansion across the globe is called imperialism. Imperialism is the control of territory already occupied and organized by an indigenous society, whereas colonialism is control of previously uninhabited or sparsely inhabited land.

Shape and Boundaries of States

SHAPE OF STATES
The shape of a state is important because it helps determine potential communication internally, military protection, access to resources, and more. The following is a list of the six types of state shapes and can be viewed in Google Maps by clicking on the links provided.


TYPES OF STATE BOUNDARIES
State boundaries are determined either by physical features such as rivers, mountains, deserts, or glaciers or by cultural features such as religion, culture, or ethnicity. Boundaries are actually dynamic features that vary with space and time. Throughout most of human history, boundaries were determined by frontiers where no political entity controlled the area. These were often large, uninhabitable regions such as deserts, oceans, glaciers, etc. But technological and communication advancements have allowed nations to protect there regions without the need of frontiers. Today, most frontiers have been replaced by boundaries.
UNITARY AND FEDERAL STATES
Many states around the world have been pressured to decentralize their governments and provide more political power to smaller ethnic groups. Most governments are placed into two categories: federal states or unitary states. Unitary states place most of the political power in the hands of a central government. The unitary state model works best with states that have little cultural or ethnic diversity and strong national unity. Federal states – like the United States – works best with nations that have greater diversity. Size also determines if a government tends to be unitary or federal. Large states like the United States, Russia, or Canada tend to be federal because having the entire country controlled by one city (i.e. capital) becomes impractical. 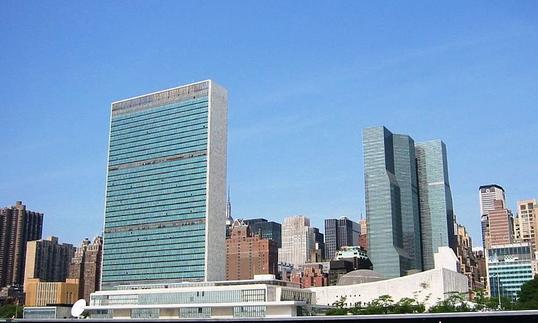 Physical location of the U.N. in New York, U.S.A. Image taken from Wikimedia Commons.
THE UNITED NATIONS
Before the United Nations was formed in 1945, the world had just experienced two world wars and the concern was “could the world survive a third world war.” With the invention of the nuclear bomb, many believe the war fought after World War III would be fought with sticks and stones! Shortly after World War I, the United States first helped organize the first international peace organization called the League of Nations. But the American Senate never ratified membership to the organization, which ultimately lead to its demise. Following World War II, the United Nations was formed, which today consists of 192 nations. The sole purpose of the United Nations is to provide a forum for nations to state they’re grievances with other nations in a civil manner rather than through open warfare.  One of the important documents that have come out of the United Nations is called the Declaration of Human Rights.  Based on the United States Bill of Rights, this declaration declares what rights humans have throughout the world no matter what nation your are citizen of. But like with all political organizations, the United Nations has not had its problems with corruption.  Yet it is important to reiterate the purpose of this organization – to hopefully prevent the world from experiencing another world war.

The most powerful council on the UN is the Security Council. The United States, Russian Federation (formerly the Soviet Union), France, China, and the United Kingdom form the council. This council has the power to determine if peacekeeping or military intervention by the United Nations is necessary. Often, these nations have differences of opinion and philosophies on various security and human rights issues. Thus, there is often conflict about what should be done. Three recent examples are Iraq, Darfur in Sudan, and now Syria.

In 2003, the United States and United Kingdom international military action against Iraq because of the concern of “weapons of mass destruction.”  But the other permanent members of the Security Council – Russia, France, and China – disagree against this action, thus the United States and United Kingdom had to invade with very little international support.  Another recent conflict pitting the United States against the other Security Council members was the conflict in Darfur, Sudan. Former Secretary of State Colin Powell declared that the conflict in the eastern Sudan region amounted to genocide; which under United Nations rules requires military, political, and economic action. But again Russia and China disagreed with the United States and vetoed any military action in Sudan. Currently, the Security Council is having problems coming together to decide what to do with the human rights abuses and mass murders of citizens in Syria.

After the fall of the Soviet Union, the world made a dramatic shift from military power to economic power. Today, the world's economic superpowers are the United States, China, European Union (the largest economic entity in the world), and Japan. The recent global recession of 2007 lasted several years and has shown the world that an economic ripple in one part of the world could cause the entire world to go into a recession. Take for example Greece that is currently has the potential to economically collapse. A collapse of Greece would cause turmoil for the European Union and could ultimately cause the United States to go into a deep recession. The United States is not immune to what happens to even small countries around the world because of globalization.

Russia has lost a lot of economic power since the fall of the Soviet Union. Well, that is beginning to change as the price of oil, something Russia has a lot of, has risen. This has provided vast amounts of money to rebuild their infrastructure, military, and economy and thus dramatically improved their influence in the world. 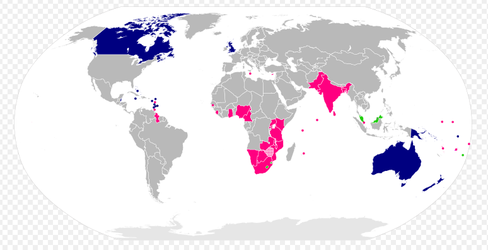 Commonwealth Realms, Republics, and Monarchies. Image from Wikimedia.
REGIONAL ORGANIZATIONS
There are a few other noteworthy international organizations that must be recognized.  First is the African Union (AU), which was founded in 2001 and is comprised of members from most of the nations in Africa.  When conflicts occur in Africa, the AU is usually the first organization to handle the situation.  The organization was founded to help Africa deal with its brutally historic past of colonialism, slavery, and apartheid, but now includes promoting economic development.
Another important intergovernmental organization the Commonwealth of Nations. The Commonwealth consists of 53 member states that include most of the colonies of the former British Empire (Bangladesh, Canada, India, Pakistan, etc.). Click on the image above to see a breakdown of the status of each Commonwealth member.

TERRORISM
The term terrorist (Latin for “to frighten”) has become a mainstream term since the attacks of September 11, 2001 in New York, Virginia, and Pennsylvania. Terrorism is the systematic use of violence by a group in order to intimidate ordinary citizens as a way to coerce a government into granting the group’s demands. Violence is considered necessary by terrorists to bring widespread publicity to goals and grievances that they believe cannot being addressed through peaceful means.  Belief in the cause is so strong that terrorists do not hesitate to strike despite knowing they will probably die in the act. State-sponsored terrorism exists when a state provides sanctuary for terrorists wanted by other countries; provides supply weapons, money, and intelligence to terrorist groups; or helps in planning a terrorist attack. Though not required for this course, National Geographic's documentary, Inside al-Qaeda, and Frontline's, Showdown with Iran, offer incredible insights into terrorism and the battle for influence in the Middle East between the U.S. and Iran. Both documentaries can be purchased in iTunes for only $1.99 each.
Geospatial technology can also be used for humanitarian efforts as a way to end conflict or monitor situations before they esculate. One organization, called the Satellite Sentinal Project, was created by The Enough Project and the largest private satellite imagery corporation called Digital Globe. The organization was first used satellite imagery from Digital Globe and Google Earth to monitor potential humanitarian conflicts along the border of Sudan and the newly created South Sudan. Now it is using satellite imagery to track poachers who use the money from the black market to fund civil wars like the Lord's Resistence Army (LRA).
ISRAEL AND PALESTINE 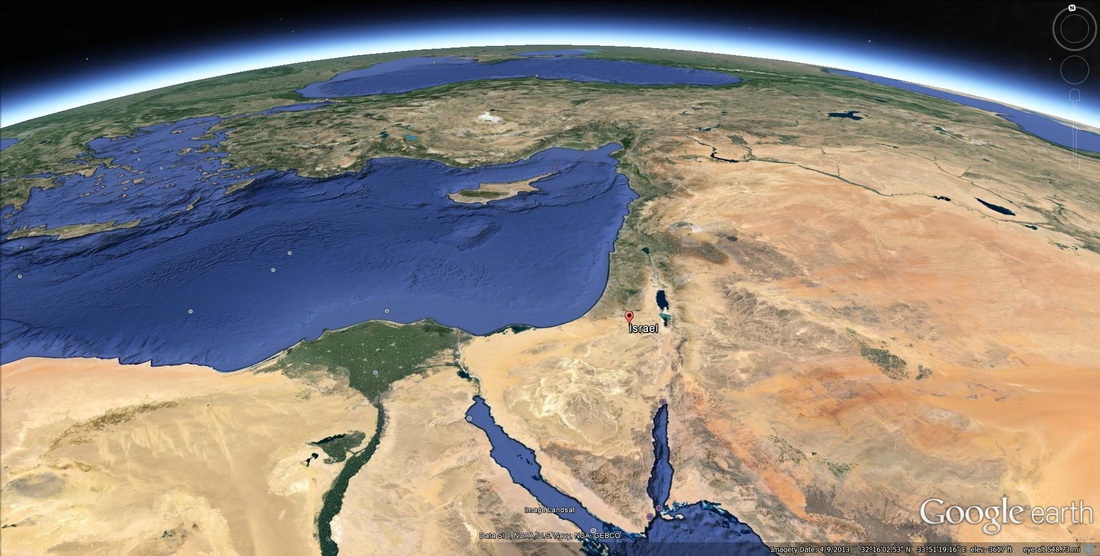 There is growing debate around the world about needs to be done to end the conflict between the people of Israel and Palestine. Basically there are three options: 1) create a "two-state solution" where basically the Israeli people keep most of Israel, but give the Palestinians the West Bank and possibly Gaza Strip, 2) integrate Palestinians into Israel and legal citizens which would make them the majority within Israel, 3) keep segregation between Israelies and Palestinians as it currently exists and be considered an apartheid by the global community.

Below is a series of videos that critically look at the Israeli-Palistinian conflict. Is there a case to be made that Israel's very survival depends on the creation of a stable and viable Palestinian state?
ISRAEL AND IRAN
Ronny Edry, a graphic design educator and activist believes that peace doesn't need to be so complicated and that all that is required is reaching out to the "enemies" you've been endoctored to hate. As you will see in the videos above, Web 2.0 and social media have become a new force in grassroots geopolitical change. Ronny Edry's movement can be viewed on The Peace Factory Facebook page. Items to consider are: