The goals and objectives of this chapter are to:

Structure of the Earth 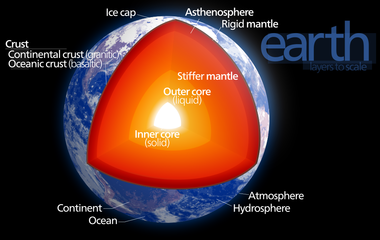 This is a file from the Wikimedia Commons.
The most powerful forces on the planet are earthquakes and volcanoes. On December 26, 2004, the second most powerful earthquake in the last 100 years occurred off the coast of Indonesia creating a massive tsunami. Several volcanoes also erupted shortly afterward in the local region. By the end of the day, over 240,000 people had died. It is possible that the earthquake occurred because another one in Iran a year earlier, killing over 20,000 people, weakened the Asian fault. In October 2005, a powerful earthquake in Kashmir, India killed over 80,000 people. And just before 5 p.m. January 12, 2010, a magnitude 7.0 earthquake devastated the Caribbean nation of Haiti, leaving more than 250,000 dead, 300,000 wounded and more than one million people homeless. On March 11, 2011, Japan was rocked by a magnitude 9.0 earthquake followed by a devastating tsunami that killed over 30,000 people. So why do earthquakes and volcanoes occur? Is there a direct relationship between the two? In order to understand earthquakes and volcanoes, you have to understand the grander theory called Plate Tectonics.

The earth consists of three layers: an inner and outer core, the mantle, and two types of crust. The earth's core consists of two parts: a liquid outer core and a solid inner core, both made of iron and nickel from the early make-up of the planet where the temperatures can range from 8,600 degrees to 9,600 degrees Fahrenheit. The next and largest layer is called the mantle, which makes up two-thirds of Earth's mass. Parts of the mantle (called the asthenosphere) act like a plastic solid, which means it has the ability to flow very slowly. Heat from the earth's interior causes the asthenosphere to convect, like water over a stove but much slower, and it is the convection that is the driving force of plate tectonics. As the asthenosphere moves, it takes with it the solid outer part of earth, which is called the lithosphere. It is the lithosphere which makes up the plates. 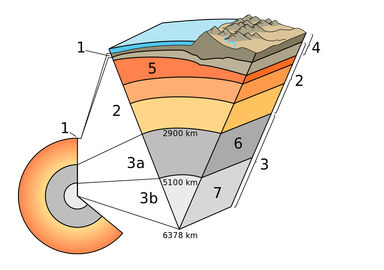 The surface layer of the earth is called the crust and it makes up only 1 percent of Earth's mass. The crust is subdivided into two components: oceanic and continental crust. Again referring back to the image on the right, note that the oceanic crust is only about 3 miles thick, but is more dense than continental crust. Most of this oceanic rock is called basalt and is a dark, dense rock.

Continental crust is much thicker than oceanic crust (averages between 20 to 25 miles thick), but is actually slightly less dense than oceanic crust. The main type of rock on continents is called granite. So if these two types of crust were to collide into each other, what do you think would happen to the oceanic crust? As a whole, notice that the crust is lighter than the mantle. It is sometimes said that the crust "floats" on the mantle like an iceberg in water and that is not too far from the truth and is called isostacy. Finally, the crust is the coldest, most rigid, and brittle layer with lots of folds and fractures. 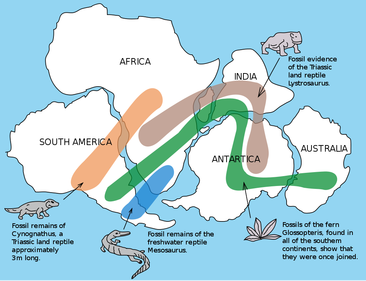 Image copyright: (USGS) under Public Domain.
In the early 1900s, a climatologist named Alfred Wegener proposed a hypothesis that at one time all of the continents were once together, creating a super-continent called Pangea, which later broke apart into Gondwanaland and Laurasia and finally the continents today. Over many years Wegner accumulated a lot of evidence to support his theory called continental drift. First, he noticed on world maps that the continents looked like large pieces of a world puzzle that could be put together to form a massive super-continent. Later he found similar plant and animal fossils on different continents separated by thousands of miles of oceans. He questioned how plants could and land species travel thousands of miles across the ocean to get to other continents; unless  at one time all the continents were once together. Wegener also found climate evidence such as glaciation in the Sahara Desert and tropical fossils in Antarctica. Ultimately, Alfred Wegener believed that the crust was not as rigid as others believed, but actually flowed somehow. Yet he could not come up with a reason why the continents would move.

Because Alfred Wegener could not propose a reason why continents would move, most of the scientific community never believed him before he died. It wasn't until the 1960s, during the Cold War, did technology finally catch up with Wegener's hypothesis. The United States military developed sonar as a way to look for Soviet submarines and in the process they discovered the largest mountain range in the world in the middle of the Atlantic Ocean, later called the mid-Atlantic ridge. 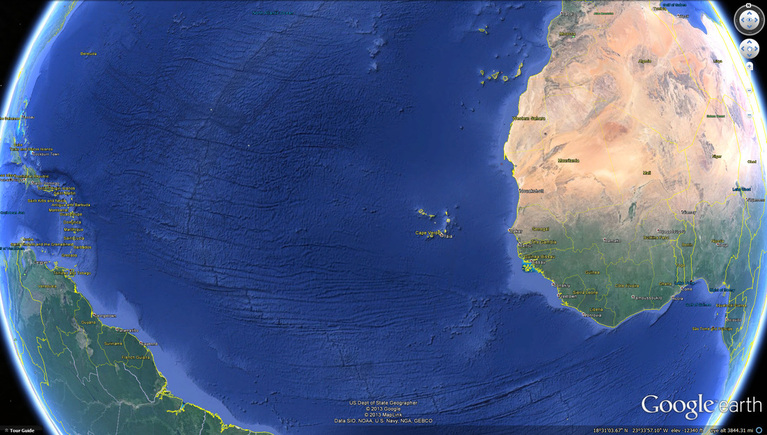 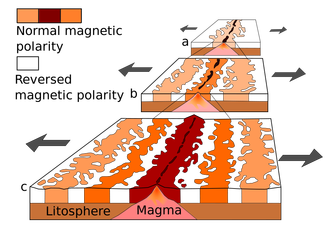 As more research was done to better understand the ocean floor, scientists discovered that the polar direction of magnetized rocks would reverse or flip symmetrical from the mid-Atlantic ridge, called paleomagnetism. At one point all the rocks are pointing toward magnetic north, followed by pointing toward magnetic south in the distant past, then magnetic north and so forth on equal sides of the mid-Atlantic ridge like a mirror image of each other. This proved that the earth's magnetic field has flipped several times throughout earth's history. Further research found that the youngest oceanic rocks exist near ocean ridges like the mid-Atlantic ridge and get older away from it.

All this evidence, including the data collected by Alfred Wegner's for this theory of continental drift, was put together to form the theory of plate tectonics. The theory states that the earth is made of several tectonic plates along with several smaller plates. Each tectonic plate consists of oceanic and continental crust. Scientists now realize that new oceanic rock is forming at these mid-oceanic ridges creating large mountain ranges. When this molten rock along the ridges rises to the Earth’s surface, the iron within them quickly points toward magnetic north (or magnetic south if the polarity has reversed) much like a compass before cooling into rock. 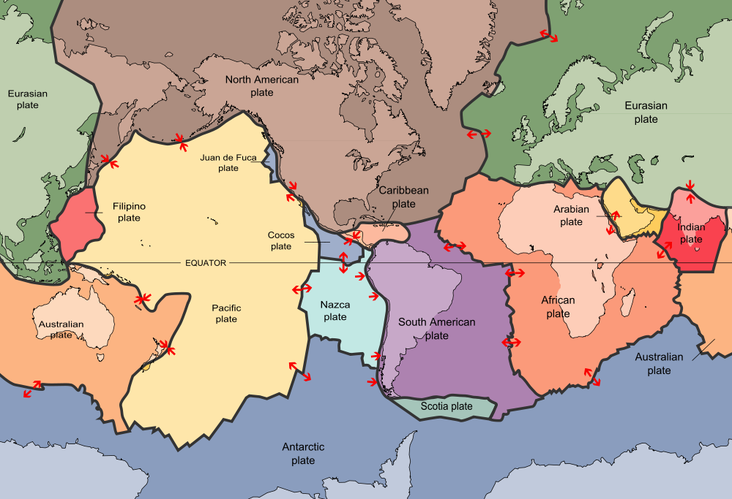 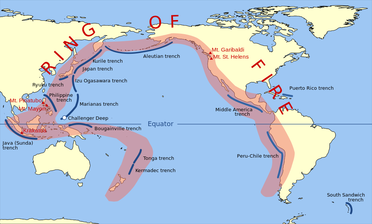 Image copyright: Creative Commons licensed as Public Domain.
But if new oceanic rock is forming, and the earth is not growing, oceanic rock must be destroyed somewhere else. We now realize this occurs along the boundaries between lighter continental crust and denser oceanic crust. When the two collide, the heavier oceanic rock subducts underneath the lighter continental crust in a process called subduction. As the oceanic rock subducts downward, it can get locked up building large amounts of energy. Once the energy is too strong, the rock snaps free releasing that energy, called an earthquake. If the crust subducts deep enough, it may begin to melt into molten rock called magma. Magma is less dense than solid rock, so the magma rises to the surface to create volcanoes. So there is a direct relationship between earthquakes and volcanoes. In fact, the Ring of Fire in the Pacific Ocean consists of several subduction zones and is where 90 percent of all earthquakes and volcanoes occur. 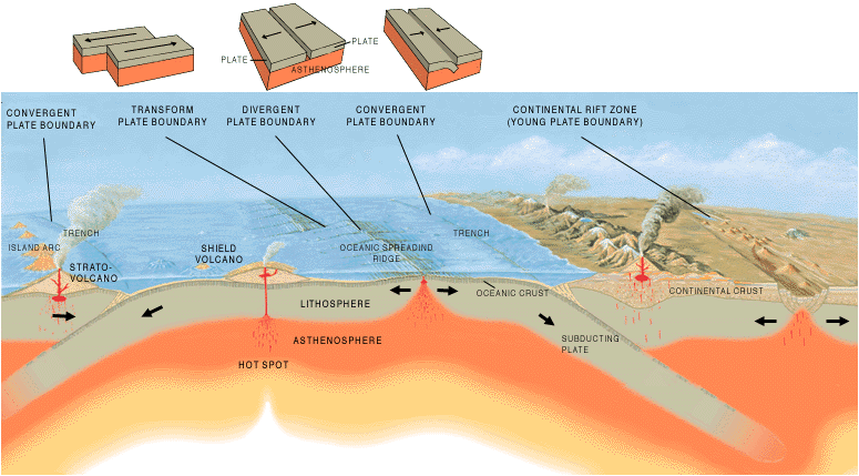 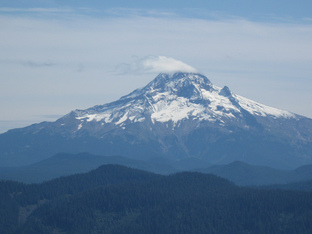 There are three major types of tectonic plate boundares: convergent, divergent, and transform. Let's first look at convergent plate boundaries, which can be broken down into three subcategories.

Recall that oceanic crust is denser than continental rock like granite. Thus when two tectonic plates collide, the denser oceanic crust will subduct underneath the lighter continental crust. If the subducting rock becomes stuck, vast amounts of energy builds up. But once the pressure and energy is too great, the rock will rupture creating powerful earthquakes. As the subducted material sinks further, it will begin to melt under great heat and pressure, becoming less dense as it melts, and rise up as magma to form dangerous composite volcanoes. Mountain ranges created by oceanic-to-continental convergence are the Andes mountains in South America, the Cascades in the western United States, and the Ring of Fire in the Pacific Ocean.

Below is a Google Earth image showing a series of oceanic-to-oceanic subduction zones within the Pacific Ring of Fire. You can visibily see the subduciton zones that create the volcanic and powerful Aleutian Islands and the converging subduction plates that make of volcanic islands of Japan. 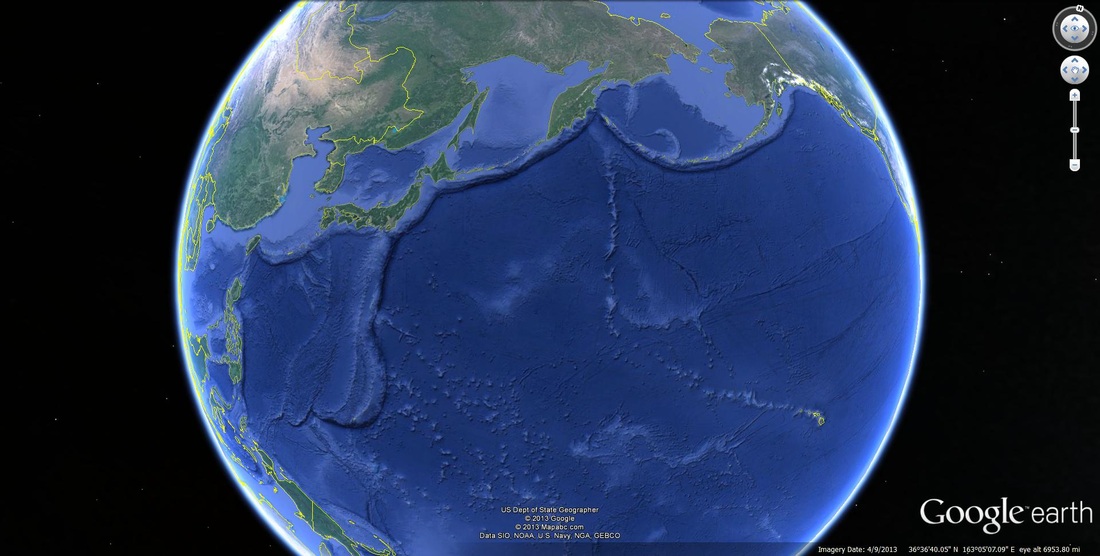 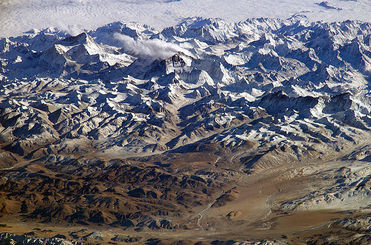 With oceanic-to-oceanic convergence, the heavier of the two will subduct down beneath the other. Just like continental-to-oceanic convergence, this plate boundary can generate powerful earthquakes and volcanoes; but instead of volcanoes on land, volcanic islands form such as Japan, the Aleutian Islands of Alaska, and Indonesia. The great earthquake in Indonesia in 2004, which produced the devastating tsunami, was created by this process along with the 2011 earthquake and tsunami in Japan.

When two continental plates converge, instead of subduction, the two similar tectonic plates will buckle up to create large mountain ranges like a massive car pile-up. This is called continental-to-continental convergence, and geologically creates intense folding and faulting rather than volcanic activity. Examples of mountain ranges created by this process are the Himalayan mountains (taken from the International Space Station) as India is colliding with Asia, the Alps in Europe, and the Appalacian mountains in the United States as the North American plate collided with the African plate when Pangea was forming. The Kashmir India earthquake of 2005 that killed over 80,000 people occurred because of this process. And most recently, the 2008 earthquake in China which killed nearly 85,000 people before the Summer Olympics was because of this tectonic force.

When convection within the mantel causes two tectonic plates move away from each other, or when a tectonic plate tears itself apart, divergent boundaries can form. As divergence occurs, shallow earthquakes can occur along with volcanoes along the rift areas. When the process begins, a valley will develop such as the Great Rift Valley in Africa. Over time that valley can fill up with water creating linear lakes. If divergence continues, a sea can form like the Red Sea and finally an ocean like the Atlantic Ocean. Check out the eastern half of Africa and notice the lakes that look linear. Eastern Africa is tearing apart from these linear lakes, to the Great Rift Valley, and up to the Red Sea. Notice how the Red Sea looks like it could be put back together again. The ultimate divergent boundary is the Atlantic Ocean, which began when Pangea broke apart.

Below are two satellite images using Google Earth, both focusing on parts of Africa. On the left yo can see rift valleys that have filled in with water to form linear lakes. On the right in northern Africa, you can see the Red Sea with a rift valley in the center, which use to be a linear lake that grew into a sea. If the Red Sea continues to grow, it could form an ocean similar to the Atlantic Ocean with the mid-Atlantic Ridge.
Transform boundaries occurs when two tectonic plates slide (or grind) past parallel to each other. The most famous transform boundary is the San Andreas Fault where the Pacific plate (that Los Angeles and Hawaii are on) is grinding past the North American plate (that San Francisco and the rest of the United States is on) at the rate of 3 inches a year. Recently, geologists have stated that San Francisco should expect another disastrous earthquake in the next 30 years. Another important transform boundary is the North Anatolian Fault in Turkey. This powerful fault last ruptured in 1999 in Izmit, Turkey which killed 17,000 people in 48 seconds.
Below is an interesting video from National Geographic called Colliding Continents. It takes a hypothetical situation of humans coming back to Earth in the distant future and uses the idea of Plate Tectonics to understand the past.