Earthquakes are serious natural hazards that affect people across the globe, sometimes at long distances from where the quakes occur. They are especially dangerous because seismologists, the scientists who study earthquakes, cannot predict them in time for evacuations or other precautions. Your goals in this module should be to: 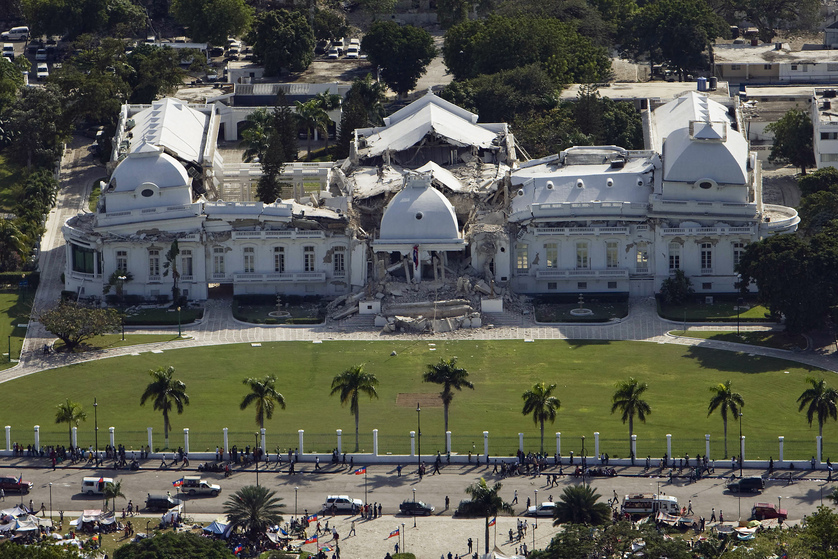 Image copyright: United Nations Development Programme, licensed as Creative Commons Public Domain.
An earthquake is a sudden motion or trembling in the earth caused by the abrupt release of slowly accumulated energy. All earthquakes occur along a fault, which is a fracture in the earth's crust where tectonic movement occurs. Where the actual break occurred along the fault is called the focus (also called the hypocenter) and the epicenter is the point on the Earth's surface that lies directly above the focus and is where the strongest shockwave is normally felt. Click here to watch a brief video on earthquakes.

Recall that all around the planet, tectonic plates are moving because of convection in the mantle. Tectonic plates are also composed of two types of crust, oceanic and continental. The oceanic crust, which is made mostly of basalt is more dense than continental crust that is made of granite. When these tectonic plates come in contact, the denser oceanic crust subducts below the continental crust. Any place that plates come in contact, stress will build as the force of their movement causes a push on each other. As the rocks begin to bend under tectonic forces, large amounts of deformation - called strain - occurs. In some places, the strain is shown as aseismic creep, which is the gradual bending or movement along a fault. In other places, the fault can become locked. When the stress becomes too great for the rocks to hold, segments may suddenly snap, releasing large amounts of energy. This is called the elastic rebound theory.

Movement along a fault can occur vertically or horizontally. The greatest horizontal displacement was 21 feet along the San Andreas Fault in the Great San Francisco Quake of 1906. Imagine in an instant being moved 21 feet horizontally! The greatest maximum vertical displacement used to be the Alaskan earthquake in 1964. The vertical displacement was 33 feet! But on December 26, 2004 a 9.1 underwater earthquake occurred in Indonesia. It had a vertical displacement of 60 feet over 800 miles long! Imaging being thrown 60 feet instantly and that it occurred for 800 miles. The compression caused by the oceanic-oceanic convergence actually sped up the earth's rotation 2.676 millionths of a second and shifted the axis 1 inch! It produced a massive tsunami traveling 500 mph. Over 240,000 died from the earthquake and tsunami; one in three were children. The image below if of an earthquake in Pakistan that killed 80,000.

There are several types of faults that earthquakes occur on, which are dependent on whether the fault is occurring because of convergent, divergent, or transform tectonic plate forcing. Geologists use old mining terms to distinguish between different types of faults. Think of a minor walking down into the earth along a fault line. The ground the miner is walking on is called the footwall. If the minor needs to hand their lantern, the ceiling is called the hanging-wall.

Image copyright: United States Geologic Survey, licensed as Creative Commons Public Domain.
In order to determine the location of an earthquake, seismologists must measure the interval distance of P-waves and S-waves released during the rupture. P-waves travel faster than S-waves, thus scientists calculate the time difference between both waves to determine a perimeter of the epicenter. But the epicenter could be anywhere within that perimeter. Therefore, scientists must use a minimum of three seismic readings from different seismograph stations in order to determine the exact location of the epicenter. 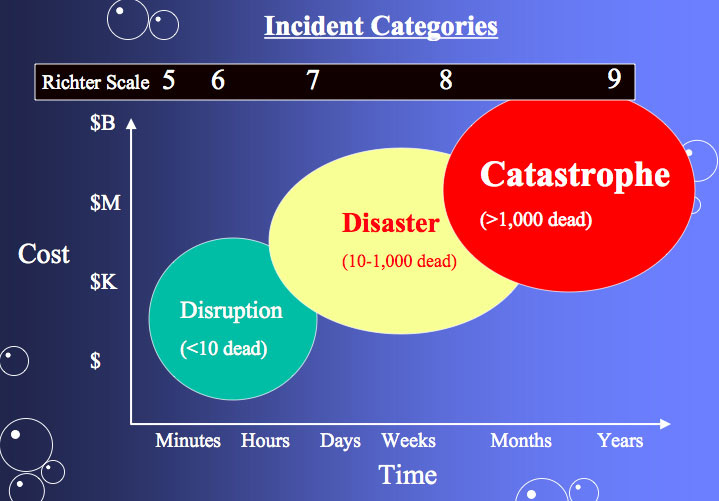 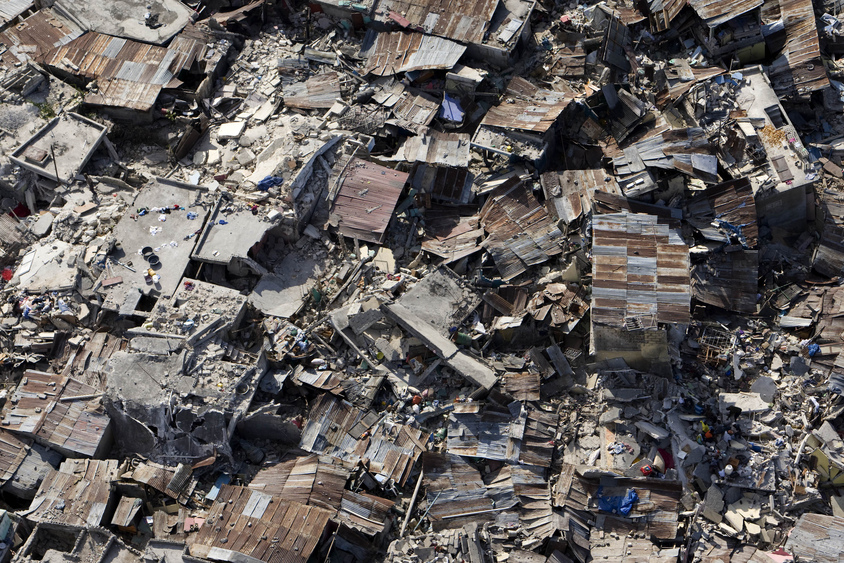 Image copyright: United Nations Development Program, licensed as Creative Commons Public Domain.
Earthquakes do not kill people; falling buildings and highways kill people. History has taught us the importance of building codes to create safer buildings. Many of the massive death tolls reported by earthquakes are caused by poorly built buildings rather than the earthquake itself. In general, buildings or structures built out of brick, stone, mud, or reinforced concrete fair poorly in large earthquakes because there is very little flexibility in the structures as the ground shakes. The best types of buildings to be in are those built of wood because of there flexibility; the house may not be habitable after the earthquake, but they won't crumble or collapse on people. Buildings with weak floors or basement garages are also susceptible to collapsing.

There are several techniques engineers have developed to help buildings withstand the destructive power of earthquakes. Many buildings are being built or retrofitted with diagonal braces that can withstand the ground motions caused by an earthquake. Tall buildings also tend to sway at different frequencies them to slam into each other during an earthquake. If engineers know how much a building will sway, they can determine how far apart buildings must be built. Finally, engineers are placing rubber pads at the base of newly built and retrofitted buildings that act as shock absorbers.
Click here to see a map of liquefaction potential and ground shaking within Salt Lake County. (You can also look at maps for Tooele, Cache, Davis, Weber and Utah Counties.) For those who live in the Salt Lake valley, notice how the liquefaction potential is greatest along the Jordan River and near the Great Salt Lake. Any ideas why? It has to do with the fact the water table is highest near those areas. So when an earthquake occurs and the ground begins to shake, the water will rise and destabilize the ground. In these maps, the reds and purples represent the areas of greatest liquefaction potential from a magnitude 7.0 earthquake.
Earthquakes can also destabilize steep slopes causing them to slip and fail. These landslides tend to occur where the ground is mostly loose sandy soil with a high water table. Fires are also another serious hazard created by earthquakes as our infrastructure collapses and electrical and gas lines break. The treat of fires will also increase as emergency crews have a hard time maneuvering through the debris. There are two simple things individuals can do to reduce their risk of a fire: first is to have a wrench attached to their outside gas line. If you smell gas at your house, quickly turn off the gas. But if you do not smell gas, do not turn it off; doing so may prevent you from having heating in your house in the winter and it may be months before it gets turned back on. Second, make sure your water heater is attached to your house. A simple $20 bracket wrapped around your water heater and bolted into your house may prevent it from falling over and breaking its gas line.

Can humans create earthquakes? Maybe not intentionally, but the answer is yes and here is why. If a water reservoir is built on top of an active fault line, the water may actually lubricate the fault and weaken the stress built up within it. This may either create a series of small earthquakes or potentially create a large earthquake. Also the shear weight of the reservoir's water can weaken the bedrock causing it to fracture. Then the obvious concern is if the dam fails. Earthquakes can also be generated if humans inject other fluids into a fault such as sewage or chemical waste. Finally, nuclear explosions can trigger earthquakes. In fact, one way to determine if a nation has tested a nuclear bomb is by monitoring the earthquakes and energy released by the explosion.

Everywhere in the world has disasters, so nowhere is safe. But everyone should be prepared for the type of disasters their region experiences. Everyone should have a 72 hour kit prepared in your car and house. Recently the Federal Emergency Management Agency (FEMA) stated that citizens should prepare a 5-day kit in case federal, state, and local agencies can not reach you. Learn more how you can prepare at Ready.gov. Here are a few more items you should think about with disaster preparedness.