The goals and objectives of this chapter are to: 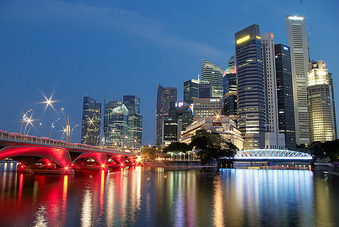 CENTRAL BUSINESS DISTRICT
Most urban centers begin in the downtown region called the central business district (CBD). The CBD tends to be the node or of transportation networks along with commercial property, banking, journalism, and judicial departments like City Hall, courts, and libraries. Because of high competition and limited space, property values for commercial and private ownership tend to be at a premium. CBDs also tend to use land above and below ground in the form of subways, underground malls, and high rises. Sports facilities and convention centers also tend to be dominating forces in CBDs.

URBAN GROWTH MODELS
Urban planning is a sub-field of geography and until recently was part of geography departments in academia. An urban planner is someone trained in multiple theories of urban development along with developing ways to minimize traffic, decrease environmental pollution, and build sustainable cities. Urban planners, sociologists, along with geographers have come up with three models to demonstrate and explain how cities grow. 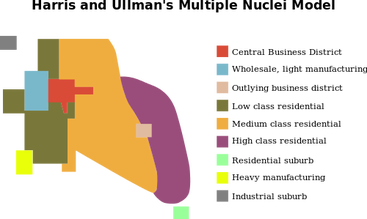 The third and final urban design is called the multiple nuclei model. In this model, the city is more complex and has more than one CBD. A node could exist for the downtown region, another where a university is situated, and maybe another where an international airport may be. Some clustering does exist in this model because some sectors tend to stay away from other sectors. For example, industry does not tend to develop next to high-income housing.

Determining which urban model fits a particular city is often based on census data.The U.S. Bureau of the Census divides urban areas into census tracts, where each track contains approximately 5,000 residents. Every 10 years, the bureau does a complete count of the country’s individuals and publishes the results. Data includes household incomes, gender, ethnicity, high school completions, and more. This information is not only collected but mapped for spatial analysis. Social scientists use the data and maps to analyze demographic patterns spatially and over time to help understands current and project future social, demographic, and economic trends.

Sociologists, geographers, and urban planners know that no city exactly follows one of the urban models of growth. But the models help us understand broader reason why people live where they do. Higher income households tend to live away from lower income households. Renters and house owners also tend to segregate from each other. In fact, renters tend to live closer to the CBD, whereas home owners tend to live along the outer regions of the city. It should be noted that the three models were developed shortly after World War II and based on U.S. cities; many critics now state that they don’t truly represent modern cities.

An excellent website on urban planning using geospatial technology is called the Urban Observatory. The website provides access to spatial data for cities all around the world and allows you to simultaneously view multiple cities at once. Compare and contrast visualized information for a greater understanding of life in the 21st century. 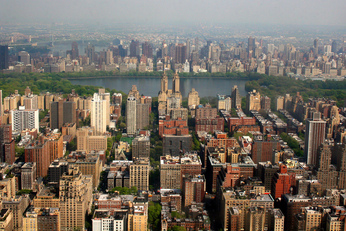 METROPOLITAN STATISTICAL AREAS
A city is defined as an urban settlement that is legally part of a larger governing entity. Cities have local officials, can raise taxes, and are responsible for providing services to local residents. The central city is a city that is also surrounded by suburbs and together is called an urbanized area. Census counts suggest that 70 percent of Americans live in an urbanized area.

The U.S. Bureau of the Census has created a way of measuring the influence cities have on surrounding regions, called the metropolitan statistical area (MSA). An MSA is defined as an urbanized area with at least 50,000 residents, includes the county the city exists within, and any surrounding counties if a high percentage of the residents within those counties work in the central city’s county. The federal government has also created smaller designations for urban areas smaller than 50,000 residents and is called a micropolitan statistical area. If there is any overlap between these two statistical areas, usually in the form of commuting and transportation patterns, the census has created the term combined statistical area.

FRAGMENTED GOVERNMENTS
There has been an ongoing conflict between cities and peripheral urbanized areas outside of the central city who want to maintain their independence. This becomes problematic for housing, taxes for schooling, transportation, garbage disposal, and law enforcement. If urbanized areas are legally incorporated into an existing city, the process is called annexation. In order for annexation to occur, the majority of the residents in the outer regions must vote to approve such an acquisition. The debate over annexation varies throughout the United States and truly is a local issue. 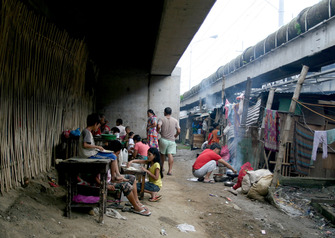 INNER CITIES
One of the major problems that cities face is deteriorating areas, high crime, and homelessness, and poverty. As noted in the urban models, many lower income people live near the city, but lack the job skills to complete for employment within the city. This often results in a variety of social and economic problems. Census data shows that 80 percent of children living in inner cities only have one parent and because child care services are limited in the city; single parents struggle to meet the demands of childcare and employment. Problems associated with lower income areas are often violent crime (assault, murder, rape), prostitution, drug distribution and abuse, and homelessness, and food deserts.
SLUMS AND SHANTY TOWNS
Some of these inner city areas are called slums, which is a heavily populated urban informal settlement consisting of poor, inadequate living standards. Most slums lack proper sanitation services, access to clean drinking water, law enforcement, or other essential necessities of living in an urban area.

A shanty town, also known as a squatter, is a slum settlement that usually consists of building material made out of plywood sheets of plastic, cardboard boxes, and other cheap material. They are usually found on the periphery of cities or near rivers, lagoons, or city trash dumps.
Based on reports by UN Habitat, it is currently believed that over 35 percent of the all those living in urbanized areas of the world live in slums and shanty towns. There are a variety of reasons why these types of living conditions develop that include: rapid rapid rural-to-urban migration, economic stagnation and depression, high unemployment, poverty, informal economy, poor planning, politics, natural disasters and social conflicts. 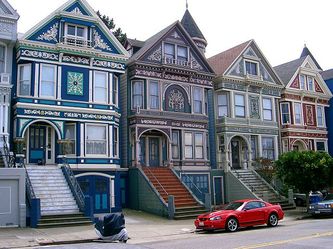 GENTRIFICATION
As a way for city officials to deal with inner city problems, there has been a push recently to renovate cities, a process called gentrification. Middle class families are drawn to city life because housing is cheaper, yet can be fixed up and improved, whereas suburb housing prices continue to rise. Some cities also offer tax breaks and cheap loans to families who move into the city to help pay for renovation. Also, city houses tend to have more cultural style and design compared to quickly made suburb homes. Transportation tends to be cheaper and more convenient, so that commuters don't spend hours a day traveling to work. Couples without children are drawn to city living because of the social aspects of theaters, clubs, restaurants, bars, and recreational facilities.

The logic behind gentrification is that it not only reduces crime and homelessness, it also brings tax revenue to cities to improve the city's infrastructure. But there has also been a backlash against gentrification because some view it as a tax break for the middle and upper class rather than spending much needed money on social programs for low income families.  It could also be argued that improving lower class households would also increase tax revenue because funding could go toward job skill training, child care services, and reducing drug use and crime. 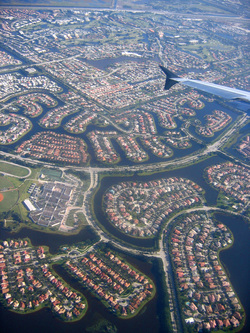 URBAN SPRAWL
Again referring back to census data, over half of all live in suburbs rather than in the city or rural areas. There was actually an urban sprawl model developed to explain U.S. development called the peripheral model. This model states that urban areas consists of a CBD followed by large suburban are of business and residential developments. The outer regions of the suburbs become transition zones of rural areas.

The attraction to suburbs is low crime rates, lack of social and economic problems, detached single-family housing, access to parks, and usually better schooling. These are nationwide generalizations and not necessarily true everywhere. Suburbs also tend to create economic and social segregation, where tax revenues and social resources provide better funding opportunities than in inner cities.

Of course, there is also a cost to urban sprawling. Developers are always looking for cheaper land to build, which usually means developing rural areas and farm land rather than expanding next to existing suburbs. Sprawl also requires more roads and utility lines to be built to reach further away from the urban centers. This often causes local governments to spend more on new infrastructure development than is received through tax revenue. Air pollution and traffic congestion also becomes a problem as working households are required to travel farther to and from work. Suburbs tend to be less commuter friendly to those who walk or bike because the model of development is based around vehicle transportation.

Building Cities for the Future

Many are saying that if we are going to save the world, we need to start with our cities. Of the 7 billion people on the planet, over half of them now live in urban areas. So it's becoming critical that humans make a conscious effort to create sustainable cities that address issues of poverty, segregation, environmental pollution, urban landscapes, and transportation. Urban planners have created a series of models that try to analyze and predict how cities have developed and their projected trends. But has criticized them because they tend to focus on European urban places and that they don't represent the global trends.

In less developed countries, shanty towns of extreme poverty  are a lot of issues that must be considered and addressed with our city landscapes. In more developed countries, inner cities must deal with poverty, segregation, higher crime rates, and homelessness. Gentrification can be a positive and negative influence on city growth. This process brings middle-class citizens into cities by providing them benefits to "fix up" inner cities. But often times this leads to a form of segregation because more often than not white citizens come in and replace minority citizens. It can also lead to controversial issues like "class warfare."